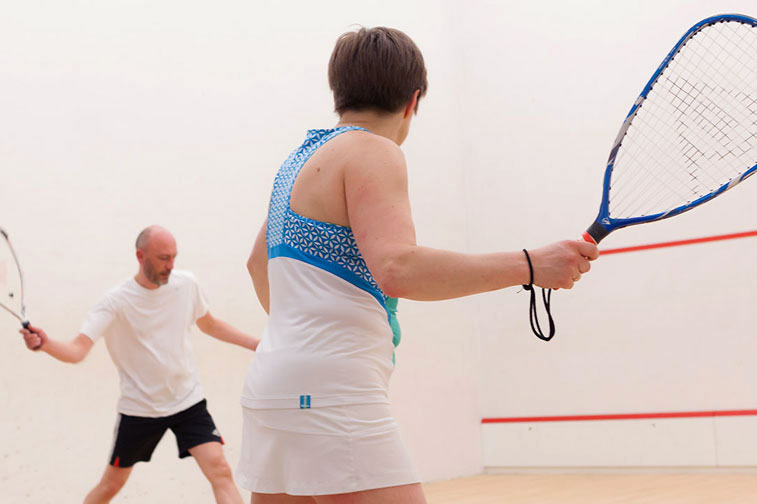 Lilleshall Squash and Racketball Club will be hosting a charity racketball tournament on Saturday 6 April to raise funds for ‘The Lingen Davies Cancer Unit’ based at the Royal Shrewsbury Hospital, which provides care and treatment for Prostate cancer patients.

The tournament was initiated by Les Bywater, an LSRC Club Member, who recently underwent treatment himself at the Lingen Davies unit and has since gone into remission. Les was determined to ‘give something back’ to the Royal Shrewsbury Hospital and as a regular racketball player, he decided to channel his passion for sport and help to raise money for charity.

Les said: “This time last year I was playing racketball and cycling 30 miles a week. I felt fit and well and was enjoying life. I decided to change GP surgery and was advised to have some blood tests, one of which was a PSA (Prostate -Specific Antigen) test.

“It turned out I had aggressive prostate cancer, which is how I was introduced to the Lingen Davies Cancer Unit based at The Royal Shrewsbury Hospital. All the staff within Lingen Davies from the reception and admin, to nursing staff and Radiographers and Oncologists are wonderful. They are kind and patient – nothing is too much trouble. I spent seven-and-a-half weeks travelling to Shrewsbury every day for radiotherapy.

“The Lingen Davies Cancer Unit has three Linear Radiotherapy Machines, which were funded by The League of Friends based at The Princess Royal and The Royal Shrewsbury Hospitals. These machines are running all day Monday to Friday, treating approximately 100 patients per day. Eventually these machines will need to be updated and replaced.

“On February 28th 2019, I was given the good news that I have had an excellent response to treatment. So, as I have always loved to play squash and now racketball, I thought it would be the perfect way to give something back to The Lingen Davies Cancer Unit by organising a Racketball Competition.”

The tournament, which is being organised with support from Club Vice-Chairman Andy Reed, will be held on Saturday 6 April 2019, from 10:30am – 1:30pm at Lilleshall National Sports Centre, near Newport, Telford. The tournament will feature 20 players, who will be performing in four teams of five. Les will be taking part in the event, alongside his son Luke and wife Helen.

Each player will be donating a £10 entry fee and refreshments (i.e. sandwiches) and medals will be provided for the competitors. Supporters are more than welcome to attend the event too and they have the option of providing a donation to the charity. You can donate to the Lingen Davies charity fund over at Just Giving: https://www.justgiving.com/lingendavies

Local companies and other generous individuals affiliated with the club have contributed prizes for the draw, and these prizes include:

In addition, Lilleshall National Sports Centre has kindly agreed to cover the costs of the court lights for the duration of the tournament and Pete Williams has also sponsored the purchase of the medals and trophy for the event.